I was reading an article recently that was all about yum cha (I think it might have been in Epicure... or it could have been the extra food guide in the Sun... such a shame I now can't find it online). Anyway, it rated GDP as a top over-all place for yum cha. I figured I'd give it a go for dinner one night. Not yum cha, but a chance to sample their food all the same. 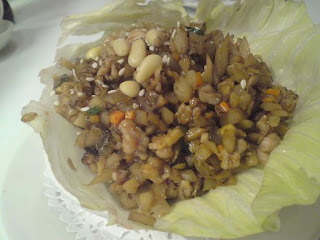 First up, an order of san choi bow. This was delicious, but a little overly generous as we had to eat half of it before we could even wrap the lettuce leaf around it! 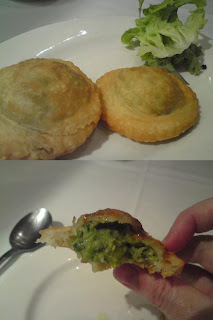 These little babies are spring onion puffs. Sooo yummy. In fact, we ordered them again the second time we went, as well. Delicately light flaky pastry, lovely fresh flavours inside. 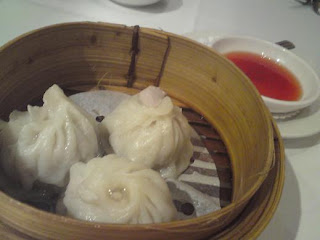 I didn't see XLBs on the menu, but I am terribly useless at seeing something when I'm looking for it. In any case, when I asked our waitress she assured us that yes, we could get a serving of these. And these specimens were quite yummy... but not a patch on Hu Tong. Also, I like my dumplings served with some dark vinegar, maybe with some gratings of ginger dipped in it too. The little dish of pale red vinegar you can see to the side here wasn't quite to my taste. Even so, I enjoyed these. 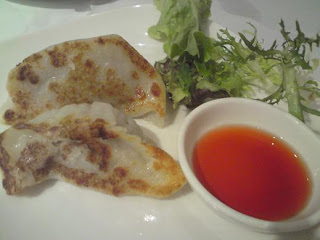 Entrees were rounded out with a serving of grilled Shanghai dumplings. Mmmmmm, I LOVE pan-fried dumpling wrapper. Oh yes, the fillings were nice too. I'd have these again in an instant. 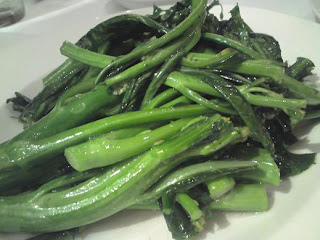 We shared the mains. First up, the stir-fried green stuff. Not much I can really report on this... they were green, they were tasty. 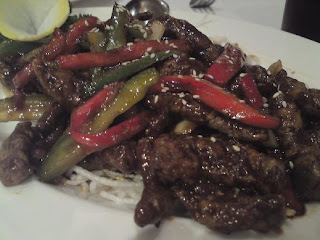 But here. Right here. This here dish above. Order it. Taste it. Drool at its memory. I'm not kidding. This dish was the stand-out highlight of the meal. It's called Mandarin Shredded Beef Fillet. It's sweet, sour, spicy... a right hook of flavours straight to the taste buds. The beef is so very tender, and coated in a thin crispy.... well, coating. The slightly sticky sauce that clings to it is just amazing. Brilliant flavours, great textures. We also ordered this the next time we ate at GDP, and it was just as good. Oh my.

The only down side to the meal so far had been the fried rice... very ordinary. But after some great entrees, and that fabulous main, the desserts really kept things going. The list isn't all that extensive, but there's enough there to have a decent choice. 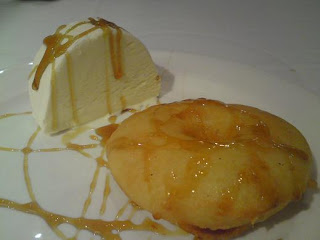 First up, a pineapple fritter with ice cream. I have no idea where they get their ice cream from, but this stuff was so creamy, and so nice, that J, a confirmed ice cream non-eater, cleaned it all up. The fritter was also well done, with no "old oil" taste to it at all. 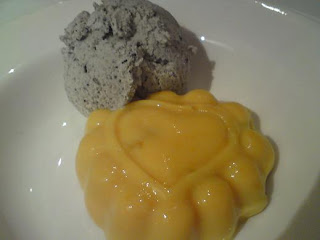 And this. I have a long-standing love of "pudding". And there was also black sesame ice cream. So when I asked our waitress if maybe I could have a scoop of the ice cream with my mango pudding I was delighted when she said it would be no problem at all. And it was goooooood. I really need to learn how to make these babies (the mango pudding, I mean).

So yeah, I'd agree with what I read - Golden Dragon Palace is a good place to eat. The food we've had on each occasion there has been great, the service efficient and helpful, and the bill quite reasonable. Can't ask for much more than than, eh?

I've wanted one for years. And this christmas, my mum got me one.

So, mum and I got together and decided to make us some fresh pasta! It was a great experience, but I'm still not sure how on earth I'll operate this thing with only two hands... but I'll figure it out :)

I'm a bit late with this post, we did it some time either between Christmas and New Year, or very soon thereafter... I'm so slack. 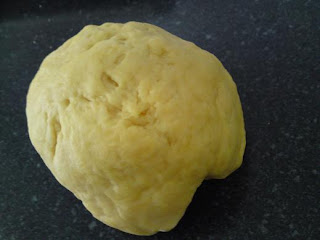 After allowing the dough to rest for half an hour, we quartered it and started the fun. 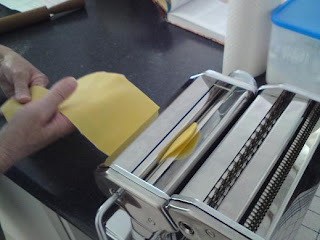 We had no idea how thin we were meant to roll the stuff, and I've learned now that it does need to be a mite thinner. Either way, we soon worked out a system for rolling: one person turn the handle and thread the dough through, the other support it and hold it coming out. Then came time to send it through to make fettuccine. 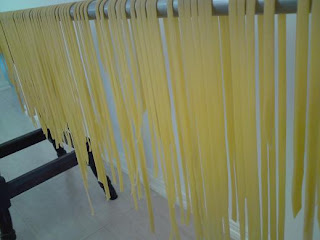 We were quite proud of ourselves by this time. We'd not only worked out how to make the dough, but also how to roll it and cut it, and we had a pretty impressive production line going. 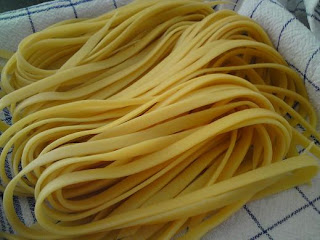 And this was the finished product. We cooked it up and served it with a tomato sauce of tinned tomatoes, passata, onion, and leftover christmas ham.

As I said, next time I'll roll the pasta thinner. But hey, for a first attempt, we did pretty good!!
Posted by Anna at 7:00 PM 3 comments:

Flipping through to the food section, I spied a couple of interesting recipes, neither of which I've tried before, and one of which was for tiramisu cupcakes.

I couldn't get my hands on hazelnut meal at short notice, so substituted almond meal. This probably contributed to the lack of nutty flavour. I also put a decent splonk of frangelico into the mix instead of a measly teaspoons-worth. And I don't have a texan muffin pan so used an ordinary 12-hole cupcake/muffin pan, total cooking time didn't change though. Oh, and if I do this again I'll add a bit more icing sugar to the cream filling to sweeten it up a little bit. I had good feedback about this one, but for me it needs a little improving. 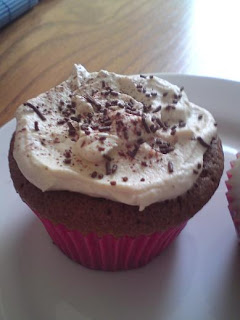 Preheat oven to 180C. Line a 6-hole Texan muffin pan with paper cases. Cream butter and sugar in a bowl until light and fluffy. Add egg-yolks one at a time, beating well after each addition. Beat in Frangelico and vanilla.

Combine hazelnut meal and flour in a separate bowl. With beaters on low speed, alternately add flour mixture and milk to creamed butter mixture, beginning and ending with the flour mix.

Spoon evenly between paper cases to 2/3 full. Bake 30-35 minutes or until cooked. Cool in the pan 5 minutes before turning onto a wire rack to cool completely.

Filling: gently fold cream into mascarpone with coffee and sugar. Using a sharp-pointed knife, cut a circle from the top of each cake. Fill cavities with coffee cream, then dust with cocoa powder.


But I did say that there were two, right? Well, the other was a pretty damn sure success.

My first experience with red velvet cake came late last year, and I've been a staunch fan ever since. So I was VERY happy to flick a few pages on from the tiramisu cupcakes to find a recipe for pink velvet cakes. My ganache turned out nothing like the picture in the magazine, but the flavour was aaaallllllll there. It just ended up as more of a glaze than anything else :) The recipe in the mag calls for a side of BBQd plums, berry liquer, and cream. I passed on that.

I put more than the "few drops" of food colouring, and used red instead of pink as that's what I had. And these babies were certainly... vibrant. But they were the winner, hands down. I'm so bummed I only had one. 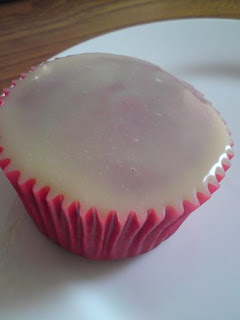 Preheat oven to 180C. Line a 12-hole muffin tin with paper cases. In a small bowl, beat butter and sugar until light and fluffy. Add eggs, one at a time, beating well after each addition.

Sift flour and cocoa together, then lightly fold into creamed mixture alternately with the milk, beginning and ending with the flour. Add the colouring with the last milk portion.

Spoon into muffin cases. Bake 20-25 minutes or until cooked. Cool in pan for 5 minutes, then turn onto a wire rack to cool completely.

Ganache: Heat the cream in a small saucepan until nearly boiling, then remove from heat and stir in the chocolate until it's melted and the mix is smooth. Let it cool (for a LONG time) until it's spreadable, then slather all over the cupcakes.

Lick the saucepan of any leftovers/dribbles.
Posted by Anna at 6:48 PM 1 comment: 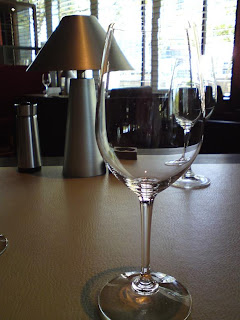 When I looked at how many pictures I'd taken at Rockpool, I was a little surprised... But with three people, visiting twice (lucky, lucky, lucky us!), is it any wonder I had quite a few? So I've decided to combine a few pictures into one space... which I think I've done well enough, considering the only program I have to do that is Paint!!! 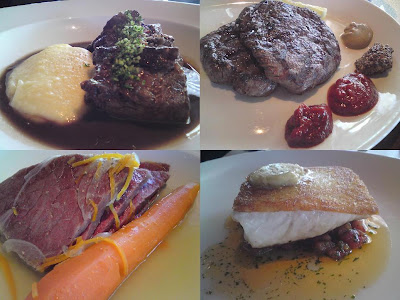 Clockwise from top left we have wagyu shin braised in red wine with gremolata and potato puree; 250g Cape Grim fillet dry aged 36 month old grass fed fillet with assorted condiments (the best of which I thought was the Bearnaise it came with); um... oh crap... I can't for the life of me remember which fish dish the next one was... maybe the seared crisp snapper?....; and finally the corned wagyu girello with slow cooked carrot (note: carrot, singular) and mustard sauce. I can say with absolute certainty that each dish was divine. 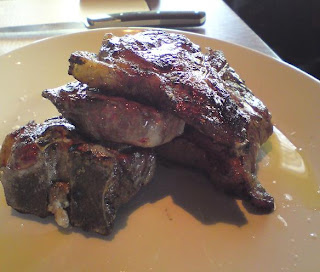 And, finally, here we have a mountain o' meat, with a li'l dish of mint jelly/sauce on the side (not in the pic). I should have written this stuff up weeks ago...

Sides from left to right are; mac and cheese; pumpkin and sweet potato with burnt butter and garlic butter; and potato and cabbage gratin. All three were incredibly good. For my money I loved the potato and cabbage gratin best, but that sure as hell doesn't detract from how good the others were. What's not shown here is the king prawn and nectarine salad. Very nice. 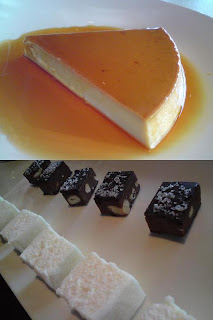 Mmm, and now desserts. On top is the orange crème caramel. Light and tasty. On the bottom are passionfruit marshmallows and caramel peanut chocolates. I can't believe how much passionfruit flavour was in those soft little cubes. It's making my mouth water even now, as I type. As for the caramel peanut chocolates - sinful. Little flakes of salt really got the taste buds popping. It was a rather rich dish, though, so I'd recommend sharing it with friends (I did try, but my companions were having too much fun with their own dishes).

Other desserts were fresh and poached summer fruits with mascarpone sabayon and lemon biscuits (top), and crème brûlée with prune and Armagnac (bottom). Bootifull. 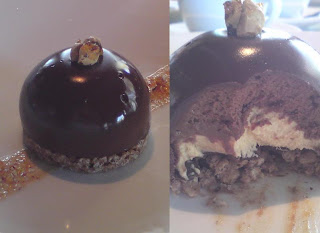 I had hoped to find chocolate cake on the menu, but it wasn't. Instead, I tried the chocolate and caramel rice crackle cake. It was soooooooo good. Even while I was eating it, and feeling very full, I kept going back for just one more bite.

So yeah, Rockpool definitely lived up to the hype for me. Can't wait for my next trip!
Posted by Anna at 4:55 PM 1 comment: