A few weeks ago Mel told me about a curry she'd made on the weekend that was a HUGE hit. I was curious to try it. I finally made my way to the Vic Market yesterday and bought a few choice ingredients. Namely, goat. That place is brilliant.

I'm sure that, for many people, eating goat is not a big deal. Me, I've never had it, so I had NO idea what to expect. Mum told me to think of lamb, and J said imagine a game-y type of lamb. I was more confused than ever!! However, having now made the curry and enjoyed it IMMENSELY, I'm a convert. I'll now happily try goat in almost anything. I was surprised at how lean it was, and how well it worked with long, slow cooking.

This was a deliciously rich, incredibly more-ish dinner that sure as hell had us licking our lips. J went back for seconds... and then finished off the rest a couple of hours later. Sadly, the picture I have here really doesn't do it justice, which of course means that you're going to have to go and make it for yourself. I think this would work well with any red meat.

I could link you to the recipe, but websites have a habit of disappearing, so here it is, with the variations I made due to either lack of ingredients or lack of equipment. What I can tell you, though, is that I can't imagine the flavour lacked anything for my changes. 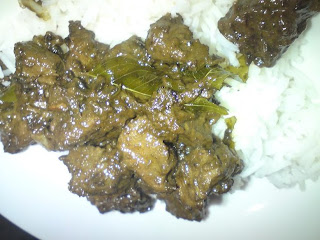 Cube 500g of goat. I used top-side. Heat some oil in a large heavy-based saucepan, then add 1 diced brown onion, a cinnamon quill, and 5g of curry leaves (or a couple of stalks-worth) and a table spoon or so of chilli powder. Then add a tablespoon of fennel seeds, 5 crushed cloves of garlic and a few vigorous shakes of ground ginger (the original recipe called for the fennel seeds, garlic and fresh ginger to be pounded together in a mortar and pestle till they became a paste, but I don't have one of those. This still worked out well) and stir fry gently for a few minutes.

Add the goat and fry over a high heat for a few minutes till the meat is browned. Add a cup of water and simmer that over a low heat for 30-40 minutes. Cue good smells.

Add 125ml of coconut cream (or more if you like), a pinch of salt, a pinch of sugar, and the juice of 1 small lemon. Cook this over a low heat until the liquid reduces to be fairly dry and any sauce coats the meat (this can take a while... I think it took a couple of hours for me). Stir it occasionally. And if little bits "caramelise" (ahem) on the bottom of the pan, scrape them up and keep on going. It all adds to the flavour! I had hoped this would serve the two of us and leave me some for lunch today, but I have to admit that, even though I was a tad heavy with the chilli, it was pretty fu... um... it was pretty damn good. And there were no leftovers. At least I know hubby-to-be likes my cooking!

After a meal like that I couldn't think what to serve up for dessert. After such a rich meal I wanted something relatively simple. Cue a treat that I don't think I've made since grade 10 Home Ec: crumble. 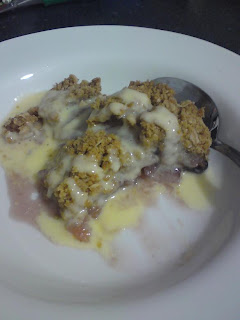 Melt some butter and grease a small ovenproof dish. Core and peel 2 medium Granny Smith Apples and 1 large pear, then cut into thin slices. Line the base of the dish evenly with half the apple slices. Layer the pear slices. Throw in a handful of frozen blueberries. Sprinkle a little brown sugar or honey around, then layer with the remaining apple slices. Preheat the oven to 180C.

How much crumble to make depends on a couple of things, like how big your dish is, and how much you like crumble. I ended up with some left over, even though I made what I thought was a tiny amount. Put 1/4 cup plain flour, 1/8 cup brown sugar and 1/8 cup of oats into a bowl. Add 25g of cold, cubed butter and rub it all together until it looks like fine breadcrumbs (alternatively, you can use a food processor). Naturally, if you need more, increase the amounts. Sprinkle this over the top of the fruit to the depth you like, pressing it down lightly. Bake for 30-40 minutes.

I had planned to make custard to have with this, but then realised that I had no custard powder left, so ended up using store-bought instead. So it wasn't quite all home-made, but it was still good.

I have to admit, if I may without sounding completely up myself, that that was a damned good meal. I done good :-)